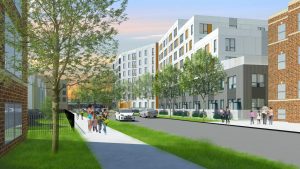 A $41.1 million, 100-unit affordable apartment complex in Logan Square is closer to development after Chicago City Council’s finance committee unanimously approved a plan to borrow $24 million for the project as well as a $10.1 million subsidy from a Tax Increment Financing (TIF) District.

Bickerdike Redevelopment Corporation’s proposed development has been on the drawing boards for years.

The seven-story complex at 2602-38 N. Emmett St., is currently a city-owned parking lot next to the Logan Square station on the CTA Blue Line, public television broadcaster WTTV  reports.

Ald. Carlos Ramirez-Rosa said the project would allow struggling Logan Square residents to continue to live in the rapidly gentrifying area. Ramirez-Rosa began working on the project soon after he was elected to the City Council in 2015.

City Council approved a zoning change for the project in November.

About half the units in the building would be designated for Chicago Housing Authority voucher holders, and the other half would be targeted to people making less than 60 percent of the area’s median income.

Critics have sued to block the proposal, the broadcaster said, noting that they contend the project is too tall, and will snarl traffic and make parking impossible in an already gridlocked part of the Northwest Side.