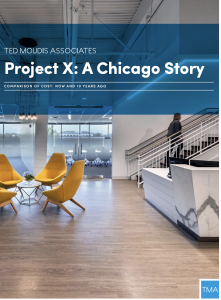 Architect and interior designer Ted Moudis Associates (TMA) says it has released Project X: A Chicago Story, which examines changes in Chicago workplace design over the past 10 years and focuses on two main ideas – how the way we work has changed the way space is designed, and how those changes have affected construction and furniture costs.

The report’s key finding was that the preconceived office renovation cost of $100 sq. ft. is no longer realistic, rather, $130 per sq. ft. is the new target cost, caused by the increase in head count capacity and code requirements, among other factors.

“Project X compares 2009 and 2019 – many of the tenants that last built-out their spaces in 2009 are currently in renewals,” Diana Pisone, TMA’s Chicago office team principal, said in a statement.

“We thought it would be interesting to compare how the workplace has changed with regard to design and usage over the past decade in Chicago. We found that because the design of the workplace has altered so dramatically over the past ten years, how we understand pricing also needs to change. Project X delves into that concept.”

The report also shows that while the target cost per-square-foot increased, there was also a decrease in terms of cost per head count when the years are compared.

Other interesting findings from Project X include: