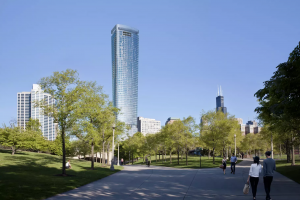 The Chicago Tribune has reported that the lender has put the 74-story tower on hold until it assesses the real estate market’s strength in September.

The bank is “concerned about economic stability of the market at this particular time due to recent events,” said Francis Greenburger, whose firm Time Equities is developing the project with New York-based JK Equities and Oak Capitals.

Crain’s Chicago Business reported in June that construction work on 1000M’s foundation had stopped as COVID-19 created economic challenges. The developers issued a statement at the time that claimed construction had stopped due to safety concerns, not financial issues.

Greenburger told the Tribune that Goldman Sachs has covered the cost of the first phase of the foundation but hasn’t released funds to continue working. The developers are reportedly exploring other means of financing the construction before the September review.
Greenburger told the Tribune that 101 of 421 units were in contract, with buyers having put 10 percent down. Those buyers are being offered half of their deposits back, though Greenburger said many have declined.
The developers purchased the site for $17.2 million in 2016.