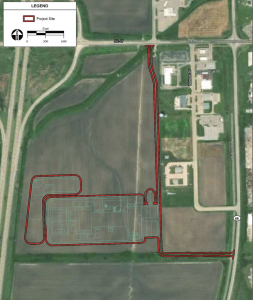 The Department of Homeland Security (DHS) is in the very early stages of plans to build an Immigration and Customs Enforcement (ICE) detention center in Dwight, Illinois, about 80 miles southwest of Chicago, CBS-2 has reported.

DHS says in a letter obtained by the broadcaster that it is preparing an environmental assessment “for a proposed contract to build a privately owned and operated ICE detention facility in Livingston County, for detainees facing deportation proceedings.”

Dwight Village Manager Jared Anderson told CBS that the village has been seeking to be home to the proposed 127,000 sq. ft. detention center, on a 40-acre farm field on the town’s west side.  It would house as many as 1,000 detainees.  There would be space for an outdoor recreation area, administrative offices, legal services, and other support spaces.

The letter says construction would take about 12 months, but the letter does not indicate when work would begin.

“Work will involve grading and excavation, framing and finishing, and paving. Construction materials will be staged within the footprint of the proposed parking lot. A worksite safety plan would be prepared for the construction period,” says the letter signed by David Frenkel, program manager, Environmental, Energy, and Sustainability.

Before construction begins, an environmental assessment of the proposed site will be required, including a period of public comment and review, the letter says.