State legislators approve $5.1 billion in funding for $20 billion One Central project — though there are many hurdles to resolve 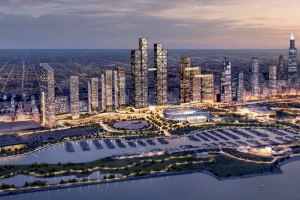 The massive $20 billion One Central high-rise development planned for the rail yard west of Soldier Field has cleared a hurdle in Springfield but the project still has many hurdles to overcome — including some significant concerns from local politicians including Chicago Mayor Lori Lightfoot.

The Chicago Sun-Times has reported that the mayor read the “riot act” to Landmark Development, based in Wisconsin, by getting $5.1 billion in funding for the project’s proposed transit center into the state’s capital spending bill. The project’s proponents say they needed to move quickly ahead of a May 31 deadline to take advantage of an expiring federal program which could provide as much as $1 billion in local financing..

“I don’t like the way that they are conducting themselves,” Lightfoot told the newspaper. “And I made that clear in no uncertain terms.”

The mayor also reportedly questioned the need for a new transit hub at that location when other transportation improvements remain unfunded, like the plan to extend the Red Line south to 130th Street.

The project is largely undefined. Developers envisage a 34 acre site with a 50-foot-tall structural cap, with a “deck” containing a shopping center and parking garage, as well as a transit hub connecting Metra, CTA and Amtrak trains. The cap could support as many as 12 mixed use skyscrapers and a landscaped pedestrian bridge over Lake Shore Drive.

Crain’s has reported that four state lawmakers representing the south lakefront came out against the proposal and signed a letter urging Gov. J.B. Pritzker to slow down the process and give constituents a louder voice.

Ald. Pat Dowell has hosted the first of several community meetings regarding the plan. Landmark’s Bob Dunn reportedly said at the meeting that the process would lead to better ideas. However, some residents booed when they heard they would have limited opportunities for open discussion, Crain’s has reported.

Source: Chicago Construction News State legislators approve .1 billion in funding for billion One Central project — though there are many hurdles to resolve